The end of January and the beginning of February is a time for maintaining a steady pace before the gradual acceleration of activity as  spring approaches and when things can become a little frenetic. Time is running out to complete winter maintenance jobs, planned or unplanned.

The vegetables plots have been cleared and a manure mulch applied to protect the soil over winter to eventually work itself in. Winter vegetables have gradually been harvested with just some leeks and kale remaining. Fruit bushes and trees have been pruned and mulched. The greenhouse has been cleared and cleaned. I always resist the temptation for using the greenhouse for storage so you won’t find piles of pots and seed trays nor any general clutter. I do have some tender plants in containers over-wintering and some rows of 'Little Gem' lettuce not far off being ready for picking. The grape vine 'Black Hamburg' has been pruned and trained. It has reached the point of beginning its journey along the greenhouse roof.

With some exceptions, I start off most of what I grow in pots, modules and trays before planting out in their final positions. These are all cleaned and sorted ready for spring sowing. And of course seed packets have been sorted and orders made for new supplies.

Then there are the bigger annual jobs: trimming hedges, pruning shrubs, repairing stock fencing. I’ve also resumed work on the rough wooded areas on the holding hinterland. This has involved clearing wild shrubs (mainly elder and hazel) and cutting out poplar suckers that have become small trees: all good supplies for the wood burner. Finally, strimming the undergrowth. Part of the rationale for this clearance and tidying up, apart from preventing the poplars from suckering out of control, is to make the area less attractive to rabbits. Another reason is to minimise the somewhat thuggish incursions from nettles and autumn leaf fall on the grazing fields. 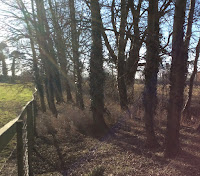 Some views of the 'woody hinterland' 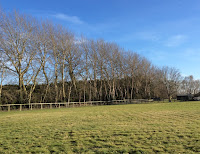 There was one building project undertaken over winter which was an 8’ x 8’ mobile sheep shelter. It lasted two weeks. Despite its substantial weight, the recent storm (with no name) was strong enough to lift it up and drop it down the other side of a four foot stock fence. It ended up in pieces - rather a lot of them. The timber and the roofing sheets are all salvageable but it needs to be rebuilt from scratch.

I have commenced further soil preparations on the vegetable plots. I’m putting together a lambing kit which needs to be ready for mid-March onwards and I’m checking for signs of pregnancy in one of the sows I AI’d a few weeks ago. All of this in expectation of good things to come.
Posted by Philip at 22:38 2 comments:

The rain stopped and I was able to resume giving the front boundary hedge its annual trim. It is mainly hawthorn and blackthorn with some dogwood in places. Our road frontage is about 200m long (that is an eighth of a mile) which is a lot of hedge to trim.

It’s just about established now and puts on about 4 or 5 feet of whippy growth during the summer and my job today was to bring it back down to its annual starting height. I trim the sides first which makes it easier to access and trim the top for a level finish. I can see the previous year’s cuts on the top of the hedge and use them as a height guide.

A couple of sections of the boundary hedge:-

Trimming the top hard back has the effect of producing side shoots and gradually thickening out the sides of the hedge. It has been planted between two rows of post and rail fencing which also provide a guide for trimming it width-wise. We have added rabbit proof fencing to the outer posts and rails to reduce the risk of their destructive incursions.

Because the hedge is a distance from the house, and because blackthorn stems can be quite tough, I use a petrol hedge trimmer for portability and power. It works very well but is heavy to use, especially having to trim above head height. Hard work for someone with an asthenic build like mine.

All the trimmings went into my new wood chipper, bought at half price. It didn’t take long to put together and get started with it (if you discount the 45 minutes before I decided I needed to resort to the instruction manual). It did the job well and got through quite an amount of material. The chippings were spread around the chicken run so were made good use of. Another winter maintenance job ticked off the list.

The weather around here has been continuously grey and overcast, and at times the atmosphere has been suffused with a fine misty drizzle. There was a brief glimpse of sunshine yesterday but it has been chased away by the return of a day of heavy rainfall, calling a halt to the boundary hedge trimming I’d made a start on.

But there are signs of encouragement out and about. We are now in mid-January and it won’t be long before final soil preparations and the first of the new year’s sowings get under way. The days are noticeably lengthening, clumps of snowdrops are beginning to appear, daffodil shoots are poking through and buds on shrubs are starting to swell.
Near to our back door we have some sarcococca (Christmas Box) bushes and their easily overlooked flowers, out now, are giving off the most amazing scent.

Whilst there is still quite a bit of the winter still to go and caution is warranted, this all helps to lift the spirits and encourages us to look forward towards the forthcoming growing season.

One other encouraging sign was yet another reserve army of ladybirds I found today hibernating in the log shelter. Hopefully they will survive the winter and mobilise in the spring  against aphids and other pests. A welcome sight and welcome residents for their contribution as a natural pest control. 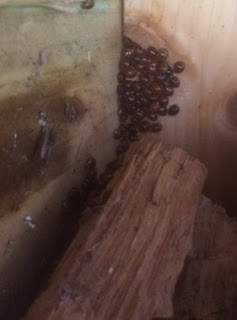 Today was dry at last. Frosty, but a day with no rain. We live in one of the driest areas of the country but we seem to have had more than usual amounts of rain so far this winter. So much so that for the first time one of our pig paddocks has become water logged with large pools of standing water, despite our sandy free draining soil. It has become poached with the footfall of our three sows.

Although they didn’t seem too bothered I don’t think such conditions are good for pigs for extended periods. Nor for me as I splodged my way through to fill the water trough twice a day or to find a dry patch to spread their food.

Fortunately, last year I built a decent sized farrowing house for the sows to give birth. Being currently unoccupied, I have been able to bring the sows ‘indoors’ where they can stay clean and dry but also have enough room to move about, including a small uncovered run area. I’ve got plenty of straw from a nearby farmer to provide a thick bed over the concrete floor. It does involve twice daily mucking out of the run area (they don’t poo in the housing part) but they’re happy and I’m happy. 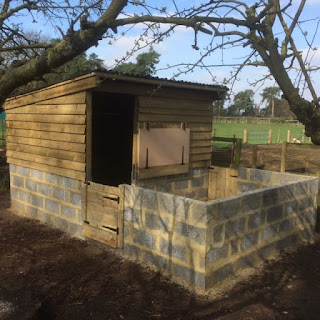 Some thoughts on Wellington boots

Like many smallholders I spend a lot of the day wearing Wellington boots. They have many advantages. They keep your feet dry and are ideal for working in muddy conditions. They also have the advantage of being easy to slip on and off as you go in and out of doors.

The problem with wearing Wellingtons all day is that they are not a particularly well fitting form of footwear, so I suspect not really that good for the feet. The ease of putting them on and off also means that they inevitably can’t be too close fitting so that your foot slides about a bit. This results in the skin of my heels becoming dry and hard after long hours of daily wear. Buying insoles helps somewhat.

Another problem I’ve encountered with wearing Wellington boots all day is that they don’t seem to last. They split with wear and begin to leak. I get through two or three pairs a year. I once had a pair of expensive Hunters. They looked quite dashing and, perhaps with the addition of some stately sideburns, I looked a little reminiscent of the Duke himself, even if I say so myself. However, these too split after about six months. That’s not a lot of wear for your money. It has to be said, too, that they did not impress the pigs in the least.

I generally buy Dunlop’s at the cheaper end of the scale and reconcile myself to the fact that they will need replacing every few months. Some advocate more robust (and expensive) makes including Muck Boots, but so far I have not been able to bring myself to pay £150 for boots when the poshest shoes I’ve ever bought were a third of the price.

One regular activity I do have to factor in, though, is a daily walk of three or more miles. For the sake of the attractive blonde who is my companion (let’s call her Spice - because that after all is her actual name) I try to avoid a muddy route. Although she doesn’t mind the mud, Spice is not keen on being hosed down afterwards and it’s a bit tedious for me. Fortunately, I’m able to walk around the  rough grass margins of the surrounding farm fields. When it’s wet (which is every day at the moment as we have had so much rain) then it’s on with the Wellington boots but also all the disadvantages associated with walking in them.

However, my daughter and son-in-law bought me these 'Highland Fleece Boots' for Christmas. They are very comfortable and keep my feet both dry and warm. Just the thing for walking in wet conditions. They look like they have been designed to last, too. 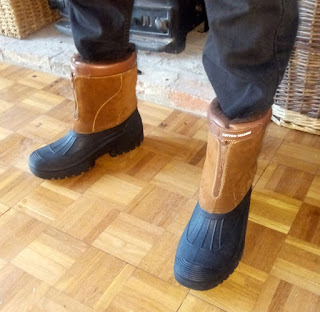