Smallholder friends who live in the Cambridgeshire village of Prickwillow have lent us the use of their field for grazing our sheep for a few weeks.  The sheep are benefitting from fresh grass and it gives our own fields, still not fully recovered from last summer’s drought, a rest. I’ve taken the opportunity to harrow our fields and over seed some bare patches. The recent heavy rain has helped to work the sheep manure into the ground and there is some encouraging re-growth for when the flock returns.

Prickwillow is about 20 minutes distant, on the way to Ely, and I make a daily trip to check on the sheep. The village is surrounded by vast flat fen fields with arable and salad crops growing in the black peaty soil. The fields are below sea level and as you drive towards the village there is a 15 foot grass embankment along the road side on top of which flows the River Lark.

The former vicarage illustrates the problem of soil shrinkage with the draining of the fens. It was originally built with two steps leading up to the front door. Over the years nine more have been added as the surrounding ground has sunk.

The Drainage Museum is located in Prickwillow. Here you can find out more about the network of fen drains and pumping stations. It houses some of the old engines that did the pumping, without which Prickwillow would be another Atlantis.

Despite being a small village, Prickwillow seems to have an active community of artists. One evidence of this is the regular conscription of the village phone box for art’s sake. It has been an art studio, a gallery and a prop for different art works. Here are some of its many guises:- 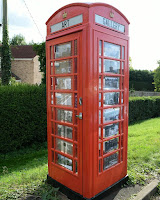 None of this will interest my sheep, but they are nevertheless enjoying the grass.

A couple years ago I mentioned a different approach to growing parsnips that I was trying out. The challenge with parsnips is that they can be very slow to germinate. With the usual direct sowing method, in the time they deign to make an appearance competing weed seedlings proliferate and a painstaking process of weeding the line has to be done without inadvertently weeding out the precious parsnip seedlings. Even more of an for me issue is uneven germination resulting in a rather gappy row.

With parsnips, as is generally the case with root vegetables, sowing in pots or modules for planting out later is not an option as they do not like root disturbance and are likely to fork. Also, in my view, the books and seed packets tend to suggest sowing parsnips too early in the year – February onwards. But parsnip seeds don’t appreciate cold wet soil. Much better to sow later in the spring when the soiled has warmed up.

The method I have used for the last three seasons has produced my best parsnip years. This time I also did a little experiment. This is what I do in mid-April. I layer a shallow plastic container with damp kitchen towel and on this sprinkle on the (fresh - don't used seed saved from last year-) parsnip seeds in such a way that they are evenly spread and not touching. Gently tamp them down so that the flat surface is in contact with the damp paper towel. Cover this with clingfilm or a clear plastic lid. Leave on a window sill indoors. After about a week or ten days the seeds will nearly all have germinated. A small tail of root will have emerged, 2-3mm long. They need to be planted out fairly soon after this because if the brittle root grows too long there is a risk of it breaking off.

In ground you have already prepared plant out the seeds individually 4 inches apart and 1⁄2 an inch deep. This is admittedly the fiddly part and if you are long-sighted, wear your reading glasses. However, there is the advantage of knowing that you are only sowing germinated seeds, and that they will emerge much sooner, and, being at the requisite planting distance, no thinning out will be necessary. You are much more likely to end up with a full row.

The first couple of years this seemed to work well for me. This year I sowed a 20 foot row in the way just described and another 20 foot row alongside using the traditional direct sowing method. Seed from the same packet was used for both methods. For a 20 foot row at 4 inch spacings there is room for 58 plants. Having recently checked progress the results are that in the ‘traditional row’ 19 seeds germinated and produced seedlings. Some of these will have to be thinned out to the appropriate spacing though. In the pre-germinated row 54 seedlings have survived and as they are all at their final planting distance no thinning out will be necessary.

This year has convinced me that the approach is worth the effort and I will continue to use it in the future. In practice it is not as laborious at it might seem. This way one or two rows of parsnips is viable and more than enough to see us through.

The last few weeks have had a bit of a poultry focus. The egg laying hens laid throughout the winter to give us a continuous supply of eggs. For a couple of months now they have been at full throttle. Fortunately we have a good pool of people for whom we regularly set aside eggs. We only put out a limited number at the gate because of persistent thefts which is a shame because we have found that there are a surprising number of people seeking out free range eggs. Only yesterday someone called in and asked if we can reserve 3-4 boxes a week for him.

We collected 20 day old table bird chicks nine weeks ago which will be ready to begin despatching soon. They are a Ranger Breed. Slower growing than the standard commercial Ross-Cobb, they range about like normal chickens, being able to support their own weight. Those who are familiar with the latter (which we avoid) will know what I mean.

For the last two years a batch of 20 ducklings, which we grow on for meat, feature as part of our annual poultry intake. A smallholder friend organises a large order on behalf of a number of Fenland Smallholder Club members and acts as the collection point. This is a great example of a co-operative effort where everyone can benefit. They are now big enough to be at a much reduced risk of predation by crows and have been let out into a larger open grass run.

We also bought in our annual cohort of one day old Norfolk Black turkey poults. Just ten this year. These are still a couple of weeks from being moved outdoors. Like other poultry reared separately from their mother they need to be gradually hardened off like tomato plants. Once acclimatised turkeys are actually very hardy and in fact ignore the housing available to them, preferring to roost outdoors even in cold, frosty weather. I installed outdoor perches for them for this very reason. Each evening they all sit in a line on the perch ready for the night.

Its nice to have a few traditional breeds of hens in our free range flock. We only do a limited amount of incubating. A few weeks ago we came across some Light Sussex eggs at a nearby farm shop and bought half a dozen. Three hatched and are feathering up nicely in their distinctive colours.

We recently made a big decision: to get our own boar. After some initial successes with artificial insemination the last few attempts have drawn blanks. The fact of the matter is that getting a sow in pig using AI on a small scale is somewhat hit and miss. This is partly because with saddlebacks it’s difficult to be certain when the sows are in season and the two day window of opportunity is easy to miss. For a boar the whole process comes naturally and should do a better job than me.

Because we have been breeding registered pedigree British Saddlebacks we could not locate a boar within reasonable distance that we could borrow. Although there are issues with bio-security and movement protocols on and off respective holdings, the advantage of borrowing a boar is that you don’t have the cost of keeping and feeding an additional pig.

It was not straight forward locating a boar for sale either. There are not that many around. At the end of 2018 there were only 128 registered saddleback boars in the country. Taking into account the need for a different bloodline as well as distance their scarcity increases.

Eventually we located a suitable one for sale near Scunthorpe. We have been up to collect him and he now seems settled in his new home. His pedigree name is Tudor Dominator 6. For day to day use, all our pigs have Anglo-Saxon names so we will be calling him Alfred or Alfie.

I've had to do some re-arranging of our pig paddocks including some new fencing and gateways.

We have great expectations for our new boar and he has already been into action with one of our sows.