I mentioned yesterday that we collected some meat bird chicks to grow on, and have previously described our regular acquisitions of rescued brown commercial hybrid layers kept for their eggs. Although the latter are allowed to live out their natural lives both are essentially kept for reasons of utility.

We do keep some traditional pure breeds because they are attractive and pleasant to have around. This includes Cream Legbars, French Copper Marans, Black Rocks and Ixworths. The Legbars and the Copper Marans have the additional novelty value of laying blue eggs and dark, almost chocolate, brown eggs respectively. The Ixworths are a noted local Suffolk breed.

The fact of the matter, though, is that traditional breeds can be irregular with their egg laying and are not that ideal for meat. They have limitations as far as self-provisioning is concerned. Nevertheless, its nice to see a mixture of breeds free-ranging together.

During the week we collected another new batch of twenty, day old meat bird chicks. We’ll grow them on for about 12 weeks and then start dispatching them over the subsequent two weeks. This will go a long way to meeting our poultry meat requirements.

They are an unnamed commercial hybrid. We’ve had Ross/Cobb, the standard bearer for commercial broilers, but found they grew too quickly. This resulted in some dropping dead for no apparent reason and others barely able to support themselves by their legs. The strain we have had of late are slower growing and free range in their run like normal chickens should. 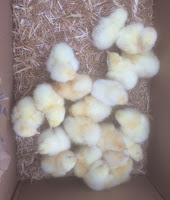 Apart from having plenty of space they also have a varied diet which includes greens and mixed corn. We don’t, of course, inject with hormones or antibiotics to help them along. When we dispatch and process them we don’t wash them in chlorine nor inject them with water. Ours are a distinct improvement on the average supermarket bird. The meat is denser and actually tastes of chicken. When we last calculated the cost of raising meat birds it came to £2.44 per kilo (admittedly not including labour) but not bad for free range chicken if the economics of the process is considered important.

In between sowing seeds, soil preparation and chopping wood (it’s been bitterly cold for mid March), and life outside of smallholding, I’ve been busy with livestock matters. The main event in the last week or so has been the commencement of lambing. I know for us it’s a matter of just five breeding ewes this year and so lacks the intensity of demand of a commercial sized flock but I am nevertheless still responsible for the welfare of the animals involved however few in number.

We’ve had mixed results so far. The first two deliveries were both sets of twins. In both cases one of each pair did not survive beyond 48 hours. One lamb, which was born distinctly undersized compared to its twin sister, developed pneumonia and went down hill very quickly. The second one, after seemingly doing well suddenly deteriorated. Despite bringing it indoors for warmth, tube feeding, antibiotics and anti-inflammatory medication it too died.

One rather large lamb needed some help to be delivered but once out in the big wide world it was soon up and about with the ministrations of its attentive mother. So far we have four healthy lambs with one more delivery to go.

The pigs have needed attention too. A couple of weeks ago we sent off two pigs at six months. We have more to go off next month but one young boar’s hormones were firing away and he kept jumping the electrified wire to join the adult sows (his mother, aunt and sister). This was a situation that could not continue so he has gone much sooner than planned.

Taking an animal to the abattoir is a bit of a process: booking them in, getting the movement licence in place, making sure your trailer is in working order, loading the pigs, setting off very early in the morning (5:30am) and ensuring that everything is well organised and runs smoothly with animal welfare uppermost.

Anyone who has tried to load pigs onto a trailer will be familiar with the challenge. Sometimes it takes just a few minutes, but at other times it can prove frustratingly tricky. Pigs become wary of the unfamiliar sight of the trailer and are not keen on ascending the ramp. All sorts of techniques and strategies have been suggested to coax them along and most are worth trying. I've built a narrow corridor from corrugated steel sheets into which I can back the trailer. It is wider at the opening and so its acts as funnel to send them in the right direction and makes its more difficult to turn around and scarper. It does become easier with experience. Fortunately we also have the assistance another couple who are smallholding friends to help out too.

I'm off to check the sheep again this evening. Fortunately the temperatures are at last picking up again which makes it a more comfortable experience for the lambs as well as me.

Here are some lamb photos as you might expect. 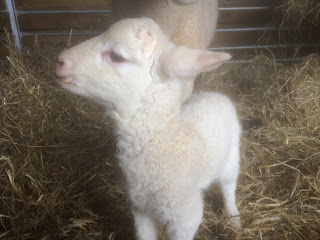 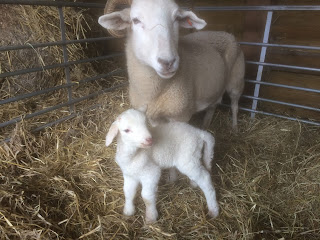 Lambs that learn to walk in snow
When their bleating clouds the air
Meet a vast unwelcome, know
Nothing but a sunless glare.
Newly stumbling to and fro
All they find, outside the fold,
Is a wretched width of cold.

As they wait beside the ewe,
Her fleeces wetly caked, there lies
Hidden round them, waiting too,
Earth's immeasurable surprise.
They could not grasp it if they knew,
What so soon will wake and grow
Utterly unlike the snow.