How are the bees doing?

When we have a protracted spell of freezing weather there is always a bit of concern about how the bees are faring. Last year, it will be recalled, we had a longish period of sub-zero temperatures in early spring but the bees nevertheless managed to safely come through the winter. I know a few beekeepers who lost colonies last year; a reminder of their vulnerability.

In fact bee colonies, so long as they are of a minimum critical size, can tolerate cold conditions quite well. Other risks in winter, once any argy-bargy from wasps in the autumn is passed, are starvation, dampness in the hive, predation, often from mice, and infestation from varroa virus. There are ways each of these risks can be mitigated, however.

During the winter honey bees do not hibernate; they remain awake. They keep warm by clustering together and protecting the queen in the middle of the huddle. Being largely confined to the hive they rely on their honey reserves for food and energy. But like many people who keep bees, I supplement their food supplies. At this time of the year fondant is commonly provided, placed over a hole in the crown board which covers the frames. Bees can draw on fondant from below through the hole. The hive lid or roof covers the top of the hive as protection from the weather.

The temptation to take a peek at the bees in winter has to be resisted as a sudden drop in temperature in the hive, and certainly any disturbance of the cluster, could prove fatal to the colony.

A week or so ago, on a mild day when I was digging up some leeks, I saw a honey bee flying. Bees do sometimes venture out during the winter if temperatures rise above about 10 degrees centigrade. I do not claim to recognise every one of 'my' bees on sight but since it was only about 100 feet from the hives I'm pretty sure it was one of  mine. Which was reassuring.

Catching up with alliums

Bright and sunny for part of the day yesterday. With daffodil shoots showing through it felt quite spring-like. But I won’t be taken in by this; there is still a lot of winter left. Maybe it's January that is the cruelest month.

Nevertheless, I took the opportunity to belatedly plant out two 20’ rows of garlic. I say belatedly because although spring planting is often suggested I have got best results from planting out in autumn. I’m a bit later than usual because the ground wasn’t quite ready for where I wanted to plant them.

I don’t generally do autumn sowings to get a head start for early spring crops. This involves a bit of cosseting through the winter and in any case spring sown broad beans, for example, soon catch up. However, this time I did sow some onions last October in 3” pots. These were thinned out to one plant per pot after they had germinated. They have all grown well in an open cold frame. Today I planted out 50 onion plants alongside the garlic.

In the spring I’ll plant out some onion sets to crop later, and also some shallots. You get a lot of shallots for your money because of their bunching capacity. Its always handy to have them if you need something less dominant in the dish you are cooking.

I might give red onions a miss this year. Pretty as they are, they bolt so readily and don't store so well. Last summer's blistering heat made the problem worse last time round.

We still have plenty of last season’s garlic and onions stored which should see us through until the the next crop are ready.

Although different pruning jobs can appropriately take place all year round, we are now in peak pruning season when most trees and shrubs are dormant. There is some grounds maintenance pruning to be commenced soon, mainly trimming the boundary hedges and one or two internal hedges. A key pruning task is pruning the fruit trees to maximise fruit production as well as the health of the trees. The  soft fruit has already been done. A fair amount of ornamental shrub pruning has to be done too, and I usually tackle this in small episodes throughout the winter when time allows.

Today I spent time on some climbing and bush roses which grow up against a sunny garage wall. These have been somewhat neglected in the last couple of years with only a quick annual tidy up. The time had come to prune them properly and clean up the narrow border from which they emanate.

There are three climbing roses and one shrub rose here. In front is a run of sarcoccoca bushes (Christmas Box), their tiny flowers soon to open and give off a delicious scent. To one side is a honeysuckle which has infiltrated the climbing roses and if ignored will take them over.

There is no real mystique about pruning roses. Bear in mind also that they are tough plants and will re-grow with vigour. You won’t kill them by hard pruning.  Nevertheless, it pays to do a good job. Here are the steps to take:-
If you go about it systematically pruning is not that complicated. The end result might seem a bit severe but it will undoubtedly have a re-invigorating effect on the rose and produce many more flowers.

Having carried out what I’ve just preached, the base of the plants was weeded. This also included clearing away a lot of rooted stems of the neighbouring honeysuckle and confining it to it’s allotted area. I also took out altogether one of the three climbing roses because they had been planted too close together in the distant past and were now too congested. All that remains is to apply a thick mulch of compost. Another winter job completed.

Feeling a bit down? Try ecotherapy

I’ve previously posted about the relationship between modest levels of regular activity, of which gardening is a good example, and positive mental health. There is a related area where there is growing evidence that exposure to ‘nature’ also has specific benefits for improving mental health and feelings of well-being.

The evidence suggests that almost any experience of the natural environment has beneficial effects. It need not be a trek in the foothills of the Himalayas or a view across the Yorkshire Dales or visits to the seaside. Or even living on a rural smallholding. It could simply be taking in the sight of a tree outside of your window at home. There is indeed one study that found that hospital patients who could view trees from the ward windows were discharged sooner than patients with no such view.

A recent literature review on health and the natural environment found, among other things:-
A  Canadian study of individuals monitoring their emotional responses to natural and urban environments respectively, found that the former reported higher levels of happiness and general well-being compared to the latter. Another study has found that exposure to green spaces improved people’s body image and consequently their sense of well-being. More evidence that gardening, specifically, reduced stress levels and can also contribute to longevity, was published just a few weeks ago.

A similar area of research to the mental health benefits of exposure to the natural environment concerns the potential benefits of engaging with animals. Contact with, or caring for pets or farm animals helps promote a sense of nurture and responsibility outside of the self. It can help in promoting social interaction and can have positive benefits in the resulting relationship bonding. In its more advanced form such approaches have led to the development of Care Farms. Interestingly enough, many years ago I worked with a psychiatrist who had previously qualified as a vet who often espoused similar ideas.

One of the reasons for such potential benefits is that being in a green or natural environment is one means by which individuals can connect with the world outside of themselves. In essence this is what some forms of psychotherapy aim to achieve. This is in contrast, for example, to the tendency for individuals experiencing anxiety, depression or low self-esteem to be pre-occupied with ruminating thoughts about the past, or recurrent anxieties for the future. It acts as a form of mindfulness whereby attention is re-directed to the here and now, which the natural environment and all its fascinations is particularly effective at promoting.

Some of this might seem intuitive or common sense, but as with the case of the mental health benefits of regular moderate activity, there is now accumulating research to support such claims. It is sometimes useful for otherwise taken-for-granted assumptions to be subject to inquisition.

So, take a walk in the park, listen to the song of a blackbird, look at the sprinkle of snowdrops, brush against a rosemary bush and smell the scent that is released, feel the smoothness of the bark of a Tibetan cherry prunus serrula, taste a home grown tomato. They don't require a high level focus, just a passing fascination. Delight in them and feel your spirit lift. 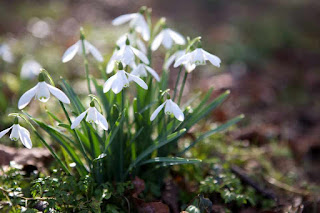 *I have resisted the temptation to include citations and turn this blog post into an academic essay, but I’m happy to provide references if requested.