March is upon us but it doesn’t much feel like it. Although I quite believe Vladimir Putin has a track record for disruptive interference in other nation states I don’t think he has anything to do with the current bitter chill and snow that has come our way from Siberia.

Before its arrival I made my first sowings of the year. As always I start with broad beans (Aquadulce Claudia) and leeks (Musselburgh). Both can be sown early because they can stand the cold well. I sowed them in pots and modules in the greenhouse for planting out later. I rarely do autumn sowings for an early crop in the spring because seedlings and young plants stand still over winter and need a bit of care to see them through. In any case spring sowings soon catch up and I can bear to wait a couple of extra weeks for fresh broad beans.

There are a couple of exceptions. I sowed some Little Gem lettuce in the autumn in the greenhouse border which have grown well. They are ready to pick now. The other exception is garlic. I find garlic does better for me if planted in the autumn rather than the spring. This year I’m trying something new which is to plant the cloves in pots rather than straight in the soil and they will be soon planted out. I planted the variety Wight Cristo which is generally reliable and commonly available in garden centres. This year I have also planted some ordinary supermarket garlic. The horticultural magazines and gardening books advise against this. But a smallholding friend has had regular and enviable success going this route (and saving money too) so I’m going to see how it does for me. Another friend has given me some cloves of Elephant garlic which she grows to an impressive size.

It’s still too soon to sow tomatoes, peppers and other tender crops in my view unless you have a heated greenhouse. The problem, if you aspire to quality plants, is to be able to produce good stout plants that have not had their growth checked along the way before they are planted in their final positions, whether that is sooner in the greenhouse or later outside. The temptation to sow early often results in lanky plants with lots of stem between the leaves. Also, its not enough to protect them from frost. Tomato plants don’t like the cold even if frost free and you sometimes see their leaves developing a purple tinge in response. I’ll be hanging on for a couple more weeks.

I’ll be sowing hardy annuals in the next few days for the cutting flower beds and  half hardy annuals in  a couple of weeks time. I’ve also got a selection of summer flowering bulbs, corms and roots to plant out when the Siberian weather passes by.
Posted by Philip at 21:10 2 comments:

Today was a busy day with livestock. All the sheep (x 9) were due for their annual heptavac booster vaccinations against pasteurellosis pneumonia and various clostridial diseases. Doing this in advance of the ewes lambing means that some temporary protection is carried through to the new lambs until they are old enough to be vaccinated themselves.


At the same time as administering their heptavac injections the sheep were also given an oral worming drench. Once all this was accomplished the flock was moved to a fresh field. The barn opens on to this field so apart from the fresh grass it is convenient for when the new lambs begin to arrive in March.

The ewes will give birth outside and I’ll bring each ewe and lamb(s) into a bonding pen in the barn for 24 hours to make sure the lamb is suckling and all else is well. In my experience the Wiltshire Horn doesn’t seem to like being confined very much and, being a hardy breed, are happy to deliver outside. You do have to remain vigilant, however.

With the sheep all settled, the next task was to inseminate our youngest sow. This was something that could not be postponed as there is only a small window of opportunity when a sow is in season. I’ve been checking for signs of her being in season and reckoned I saw sufficient evidence 21 days ago from today. So last week I ordered some pedigree British Saddleback semen, courtesy of the excellent Deerpark Pedigree Pigs, which was posted Friday and arrived Saturday morning ready for me to begin administering it today. It wasn’t possible to begin this morning so it had to be left to this afternoon to administer the first ‘dose’. Sure enough the sow stood still for me and with one or two other signs evident I was convinced the timing was right. I’ll repeat the process tomorrow morning and afternoon, then time will tell.


The weather has been bitterly cold and the forecast is for this to continue for the rest of the week and snow is also expected. We had a couple of flurries already today. Extra attention is needed to manage the consequences of icy conditions, not least because drinkers, troughs and hose pipes freeze. After the afternoon feeding round was completed all the sleeping quarters were given extra straw bedding which will hopefully help with the conditions.
Posted by Philip at 21:06 3 comments:

Wood chips to the rescue

After a few days respite the rain has resumed here in the driest part of the country. Yesterday was particularly bleak because the rain was blown in by a biting cold wind.

I still resolved to do some outside jobs, including some mending of fences (literally, not figuratively). This was a somewhat makeshift wire net fence around the bee hives which was pushed about when the sheep were last in this field. It had been temporarily reinforced by a about eight sheep hurdles. These were stolen a couple of weeks ago and as the sheep are due to return to this field very shortly the fence needed to be sorted out.

One downside of the seemingly constant rain is that the chicken run around the hen houses and feeders (where I’m  traipsing back and forth several times a day) gets a bit wet and slippery. Luckily I managed to catch the chaps who do tree work and dump the wood chips in their paddock nearby. They had just arrived with a truck load and were happy to drop it at our place instead for free. 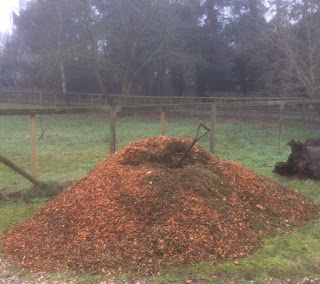 I recently mentioned that I had acquired a wood chipper for shrub and hedge prunings. However, the output from this is just a drop in the ocean (albeit a welcome drop) compared to the quantity that arrived yesterday.

Today I spread the wood chips around the chicken run which has made a big difference. In fact if you leave the wood chips in piles the hens do a remarkably good job scratching through it to leave nice even layer.

Most of the wood chips were cherry wood which is an attractive honey colour when wet (cf. the rain) and sets off the chicken run rather nicely. When it comes to wood chips for chicken runs I’m only aware of yew wood being a potential problem because it can be toxic if ingested by livestock. Perhaps the same might apply to rhododendron wood chips too. Caution is often expressed in relation to pine but I’ve never encountered any problems using leylandii in my years of keeping hens. Turning leylandii into wood chips is probably for the best in anycase.
Posted by Philip at 19:53 1 comment:

Like many keen vegetable growers we look to preserve summer surfeits for winter time consumption. One of the common ways of preservation is, of course, freezing. With experience you learn which vegetables freeze well, whether they benefit from blanching first or not, and which ones are not worth the bother at all.

I was a little sceptical about the success of freezing cauliflower, afraid that it would turn to mush once de-frosted. We hadn’t tried this before because I’ve found cauliflower a tricky vegetable to grow well, but last summer I had some outstanding results. The cauliflowers I grew developed tight, firm, white hearts.

Unfortunately, cauliflowers can’t be left long in the ground once mature unlike, say, cabbage. They have to be picked as soon as they are ready because they go over more or less the next day. With several ripening at the same time there was an unavoidable glut. I grew two sowings of cauliflower during the summer so we had plenty of fresh cauliflower to enjoy but clearly did not want to waste any surplus. Although I’m happy to throw as many courgettes, chard and other easy to grow, prolific vegetables to the pigs I thought prize-worthy cauliflowers would be too profligate.

Here's what we did with our cauliflowers. They were broken down into neat florets and dropped into boiling water for about 30 seconds. After being left to drain and cool down they were spread out on a baking tray and, when frozen, bagged up.

We found that the florets remained individually separate. We take out a meal-full when needed. They only need to be boiled for a short period before they are ready. They retain their shape and firmness and also their flavour (not all frozen vegetables do). I was both impressed and not a little surprised. I’ll be doing the same again this year if the cauliflowers reach the same standard.


We have not yet tried our more usual cooking method of stir frying our own frozen cauliflower florets yet. Cauliflower is an excellent vegetable to stir fry, by the way, as they absorb the flavours of oyster sauce and soy sauce very effectively. This method also preserves a crunch which is easily lost unless you remain vigilant when boiling them.

For those who find plain boiled cauliflower somewhat bland then I’d recommend stir frying. If you don’t like cauliflower under any circumstances then don’t grow them or, if you do, feel at liberty to give them to the pigs.
Posted by Philip at 21:39 3 comments:

Time up for Davy

Today Davy’s time was up. Davy was our ram who we’ve had for three years. Over the summer it will be time to introduce new blood into our flock with a new ram ready for tupping in the autumn. I would have liked to have sold him on as he still had two or three years tupping potential in him. On the negative side, as he has got older he had become increasingly assertive (though not overtly aggressive) with a propensity for head butting and I could never risk turning my back to him. 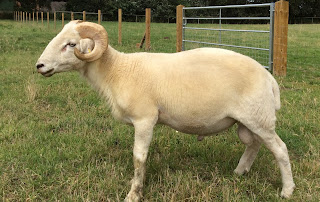 As there were no takers we took Davy to the abattoir early this morning and he will be enjoyed as mutton instead. This is an inevitable consequence of eating meat, but in this case Davy lived an unpressured existence in his patrician role to our small flock of Wiltshire Horn sheep.

During those times when Davy had to be kept separate from the ewes, he had a companion wether (a castrated ram) who was in fact one of his sons. Now Davy is gone the wether has joined the ewes and all the adult sheep are back together with last year’s lambs. We currently have five breeding ewes, three ewe lambs born last year and the wether - 9 all told. It’s a small flock but near to our limit for the amount of grazing we have available.

I’ve started to give them additional feed as the adult ewes are due to lamb in mid-March. It’s in the last four or so weeks of gestation that the prospective lambs put on a lot of growth so the ewe’s nutritional needs are greater. It won’t be long before flock numbers rise again.