Another lamb born this morning. I saw it at 6:30, brought to my notice when I heard it bleating at the edge of the field. I’d estimate it was about 20 minutes old. Worryingly, the mother (a first timer) was nowhere near it.

This is a concern because normally a ewe that has just given birth will instinctively start licking the new arrival clean. This is the beginning of the all-important bonding that takes place between the ewe and the lamb (or lambs) which can affect their survival. They get to know each other’s smell and sounds and it is important for establishing mutual recognition. The licking and grooming also stimulates the lamb and encourages it to seek out the udder to suckle and access its initial food source, and the vital colostrum, in those first few hours after birth.

Lambs are most vulnerable in the first three days after birth. Whilst potential obstetric issues tend to be the uppermost concern, the initial mothering process is just as important for the survival of a new lamb. Part of my routine, like many other sheep keepers, is to pen ewe and lambs up in a small bonding enclosure. I check that the ewe has milk by milking both teats. This also removes a fatty plug if the lamb hasn’t already suckled. Then it’s a matter of watching to see if the lamb suckles. It might initially need pointing in the right direction but you can otherwise leave the lamb and the ewe to get on with it. Once the lamb is suckling then both quickly get into the routine and all is usually fine. A watchful eye is still needed, however.

In this case I located the relevant ewe (easy enough since she had umbilicus trailing from her rear end) and moved her into a bonding pen where I had placed the lamb. The teats looked okay and both produced milk. However, the ewe was not interested in licking the lamb clean and would not allow the lamb, who was searching for the teats, to suckle. I left them to it for an hour and went back to have a look. The lamb was sitting in the corner on its own with the ewe showing no interest - not a good sign. I got it on its feet and placed it at the teat end of the ewe. She used her head to shove the lamb away. A worse sign. Hand rearing a lamb, though sometimes the only option, is far less preferable than its mother doing the job, for all sorts of reasons.

After several unsuccessful attempts over the next hour or so, with the ewe butting her lamb away, a more assertive approach was called for. I pinned her against the barn wall and at the same time coaxed the lamb to the teats. Eventually he (its a ram lamb) latched on and suckled while I kept the ewe still. A couple of hours later, more head butting the lamb away. I repeated the operation. Back again early afternoon. This time I gave the ewe some feed. This kept her still without having to pin her against the wall freeing me up to coax the lamb to find the teats. Back again late afternoon and while the ewe ate, the lamb found its own way to the teats to suckle. During the evening I went to see how things were going and the ewe was standing for the lamb to suckle. This was a relief to see, enough to exclaim, Professor Higgins style, ‘by George she’s got it!’

We are not entirely out of the woods, after all the lamb is just half a day old. At the moment the ewe seems to be tolerating the lamb rather than demonstrating effusive motherliness. But hopefully its a case of a young ewe still learning what it means to be a mother. A close eye needs to be kept to monitor progress. An eventful Mother’s Day all round.

Lambing has not quite finished for us this year as there are two ewes who still have to deliver. So far we have eight lambs. There are three sets of twins and two singles. Of the eight, six are ram lambs and two are ewe lambs. One of the ewes needed a bit of help to deliver but otherwise there have been no further problems.

The lambs are all between 7 - 14 days old and have entered the playful stage where they jump up and down on the spot, or run around together. They seem to be off to a good start. 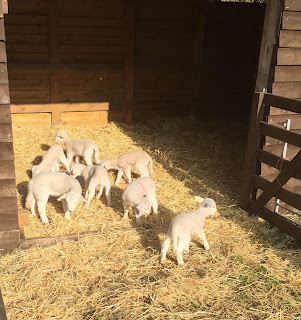 Its always a particularly busy time of the year with so much going on, and today was no exception. I have a fortunate (in my view) mix of ways I spend my time each day. Today was busy but not frenzied. Everything carried out in an orderly sequence. Apart from the regular daily routine smallholding tasks (of which there are a fair few) here is what I was up to.

On the one hand:-
- Inseminating a sow
- Collecting up fallen twigs and small branches that have fallen in to the grazing fields from the tree-lined boundary
- Harrowing the fields to hopefully improve grass growth (we need rain in these parts)
- Planting out the broad beans plants which I sowed in pots three weeks ago (reliable Aquadulce Claudia)
- Planting out onion sets (Stuttgarter)
- Sowing cauliflower in modules (White Excel)
- Periodically checking the new lambs and the two ewes who are yet to deliver (update to follow)

On the other hand:-
- Finished reading the final draft thesis of a Phd student I am supervising
- Wrote a magazine article (it didn't take long because I've been thinking about it for some time so it was all in my head by the time it came to write it).
- Commenced reading a new 'downstairs book', a biography of Somerset Maugham. (I usually have two books on the go. My 'upstairs book'  - that is, bedtime reading - is Don Quixote. Some get put off by classics in case they are heavy going, but this is a surprisingly light and amusing read).
- Following the latest Brexit shenanigans.

Tomorrow will probably be very similar. I hope it is. 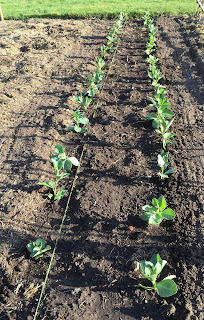 Lambing has begun for us. The first ewe, a first  time mum, got into difficulties and I had to deliver the lamb for her. Its legs were tangled up and I knew I was delivering a dead lamb. This was on Monday, a few days earlier than the expected delivery date. Although the ewe appears well and sprightly, today she still had not fully delivered the afterbirth so the vet was needed. An injection of oxytocin to stimulate the uterus and an anti-inflammatory should sort her out.

Better news first thing this morning. Another first time mum produced these. Both are suckling well and the ewe is discovering what it means to be a mother. Two accounted for, six more ewes to go. 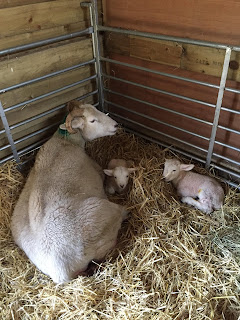 I've been a bit busy (smallholding and otherwise) and February flew by. Matters will shortly become more of a bustle as lambing is about to commence and vegetable and flower sowing accelerates.

There's always time to take in the view, though. This is what it looks like at the moment from our small field at the back of the house, looking East. 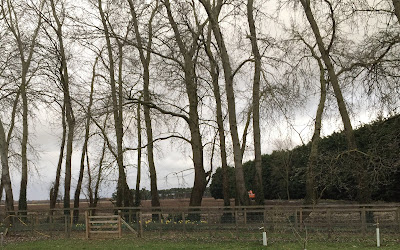 The tall poplars, leaf-naked but dripping with catkins, line the bank of a drain. The drain (dyke or ditch or lode) is about 15 feet wide and 10 feet deep. The drain is our shared boundary with the neighbouring farmer who farms the flat fen fields that surround us. The stock fencing in front of the poplars form a corridor where I can move sheep from one field to another.

In the distance is a line of scotch pines marking another field boundary and maybe acting as a wind break. To the right is a huge leylandii hedge which stretches for about 150 yards or more. Its full of pigeons that ravage my brassicas if they get the chance. If you zoom in you can see along the hedge an orange digger that has been clearing the drain to the back of us and along the leylandii hedge.

The field behind us used to be water-logged but was only brought into cultivation with the help of the War Agricultural Committee ('War Ag') when food production became a priority during WW2. This was when the drain was dug out.

Last year the field grew potatoes. I'm not sure what is going in next. I enjoy the changing view as the year unfolds.
Posted by Philip at 21:53 2 comments: