Arrival of the signets

For the last few weeks I have seen a swan sitting on a nest. This has been built in a different location from previous years and conveniently provides a clear view. 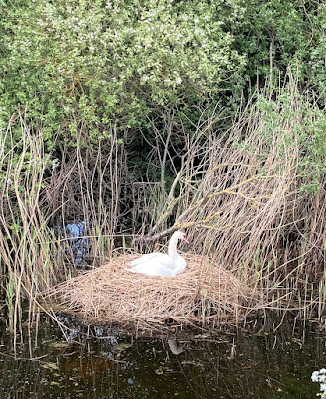 Today when I went by the eggs had hatched and I counted six new signets. Sitting around mum, they presented a serene image. Dad was patrolling a little further off. Lets hope they survive the summer and beyond. 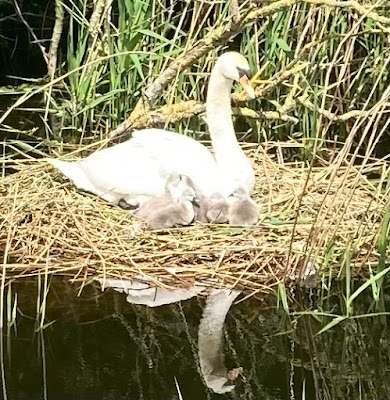 After the first quail hatched on Thursday, 48 hours later we had a total of 19 chicks hatch. They have been  from the incubator to a brooder fitted with a brooder warming plate. They are very active, surprisingly loud for their diminutive size and look like large bumble bees. 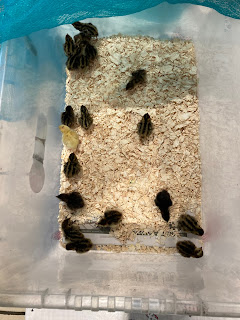 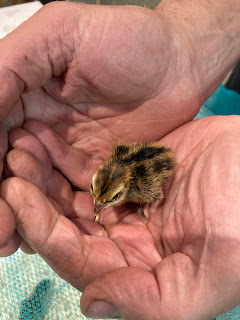 Quail chicks on the way

First thing this morning, as I was getting the bottle-fed lamb's bottle ready, I heard a "cheep, cheep" coming from the incubator. The first of the quail had hatched. Its feathers had dried off and were fluffed up making it the size of a walnut. When I return indoors after seeing to all the livestock, a second quail had hatched. Today is day 17 of incubation and the expected incubation period is 18 days for quail. Hopefully more to follow in the next day or so. 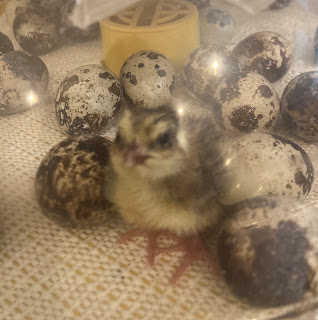 There is a tree-lined track nearby where I regularly walk and in one section you are usually accompanied by a raucous cacophony of crows. In a murky Winter afternoon it conveys a rather eerie atmosphere. They nest there in relatively large numbers and are an all-year-round presence. Its a conducive location for them as they are surrounded by arable fields.

They seem to be much noisier at this time of the year, I assume because they have chicks on the go. The rough looking crows nests made up of sticks can be seen high up in the trees.

In Russia in the late nineteenth century there was a flourishing of realist landscape artists, among whom was Alexi Savrosov (1830-97). His most noted painting was The Rooks Have Returned. It marked the transition from Winter to Spring. But here the rooks don't seem to go away.

Orange tip on a Bluebell

Orange tip butterflies are a common sight at this time of the year and are usually one of the first species to show up in Spring. There is often a second flush later in the Summer. This one caught my eye because it had settled on a self-seeded Bluebell and the orange stood out rather nicely against the deep blue. Nature is good at colour co-ordination. 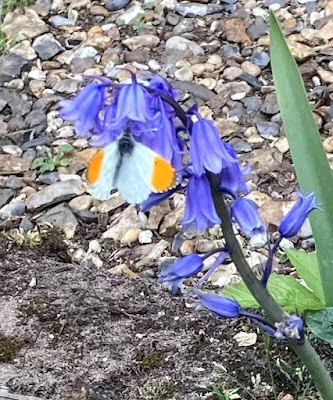 We have been enjoying fresh asparagus for the last ten days. I made the first pickings on 21st April. When I brought them in Janet said that she had just had a 'phone memory' (one of the unsolicited functions of smart phones) informing her that on this day in 2021 (i.e. 21st April) we picked our first asparagus of the year. The first asparagus to show itself is an old-fashioned variety 'Connovers Colossal'. It produces fat green stems and is very prolific. We also have two modern Dutch hybrids, 'Gijnlim' and 'Backlim'. The latter two produce slightly more refined looking stems but as far as I can tell taste the same. All three varieties have an RHS Award of Garden Merit so are demonstrably reliable. We don't really need three varieties. If I kept to just the one I am more than happy with 'Connovers Colossal'.

The wisteria climbing up the front of the house was in full flower this time last year but this year it is yet to display its glories. If you keep to the slightly involved pruning regime it should produce a good show but once in a while it doesn't quite perform. We'll see in the next couple of weeks.

Today, when out walking with the dog, I heard the first cuckoo of the year. I am not sure how the timing  compares with other years but we hear them without fail each year. Their call emanates from the tree-lined boundary and also from the small wood across the road. Its amazing how their call carries. The BBC Suffolk news website recently reported that a satellite-monitored, tagged cuckoo from Bury St Edmunds has clocked up 60,000 miles having completed its sixth migration to and from the Congo basin.