Neighbouring farmer to the rescue

I recently wrote about the state of our grazing fields in the current drought. We haven’t had a drop of rain here since April. This put paid to our normal practice of rotating the sheep around each field so that they benefit from the re-growth in between. Nothings growing. I’ve already started giving the sheep hay and have continued giving them supplementary feed which by this time after lambing I would have tapered off. I know that many of my smallholding friends are facing similar difficulties.

Luckily a neighbouring farmer noticed my plight and offered, unsolicited, use of a two acre field which “still has some green in it”. What's more, before I moved the sheep he applied fertiliser and irrigated the field so that it would green up further, which it has. All for a joint of our pork in return.

I had to buy an electric fence kit suitable for sheep because the field is unfenced. This did not take long to set up. It will be useful for the future either on my own holding to subdivide fields, or any other land I might have temporary access to in the future.

We moved the sheep up by trailer in three lots and they have settled well in their new surroundings. I check them two or three times each day which is not onerous as they are barely half a mile away. 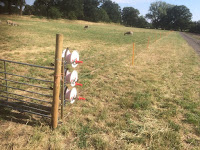 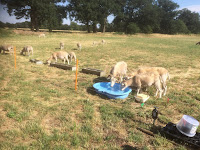 The title of this post is not as gratuitous as it might seem. It literally is the topic of interest. The fact of the matter is that after a run of successes my last two attempts at artificial insemination with my saddleback sows have not been successful. This is rather disappointing because it is often not obvious that a sow is pregnant until quite late in the pregnancy, and by the time you know the outcome much time has been lost before you are ready to try again. It would not be right for me to inseminate more than one one at a time to improve your chances that one has taken because the risk is you end up with an inordinate number of piglets to consider what to do with. It also meant that a few expectant recipients of weaners to grow on were left disappointed at the failure to produce.

As I have written previously, the challenge is that sows are in season for just two or at most three days each 21 day cycle. It means that you have to be very observant to detect the right moment and also ensure that the requisite semen has been ordered and received in time to administer. The main signs of being in season are a reddened and swollen vulva and this is sometimes accompanied by a restlessness indicating the sow is in heat. A further test (but in my experience not dependable) is the sow standing still for you as you press down on the rear end of its back.

The problem with all this with black pigs (saddlebacks are mostly black) is that reddening of the vulva is not apparent. I have also found that the sows I have kept don't obviously swell up and, if at all, it is only marginal. Daily observation of the rear end is necessary for an extended period of time because you ideally need to know if the sow's cycle is regular so that you can anticipate the date for ordering the semen.

All this being said, the clearest noticeable sign of being in season in my experience is fluid leaking from the vulva so this is what I particularly look out for. It was the turn of our youngest sow (Edyth) to try for her first litter. I began the insemination of the first of the three semen 'doses' on 11th July. By my calculation, all being well, she should be due on 4th November (three months, three weeks and three days later or 115 days).


If it does not take again then I'm seriously considering getting a boar who I'm sure will have a better idea than me on these matters.

On farms and smallholdings, particularly,  flys can be a bit of a problem during the summer, attracted as they are to livestock, manure, ripening fruit and no doubt many other delights. The dangers of fly strike in sheep I have recently encountered and its not nice.

NADIS (National Animal Disease Information Service), which I am signed up to, send out regular livestock disease email alerts and updates. The most recent one for fly strike is that the risk remains high at this time of the year but "whilst blowflies are very active in the recent hot weather, the risk of strike is lower than might be expected, particularly for shorn ewes because it is too dry for the maggots to survive. It is also too hot for the parasitic worm larvae on pasture that leads to scouring in lambs; scouring is one of the main factors that increase lamb susceptibility to blowfly strike. However, the risk will increase quickly once the dry weather breaks and so high levels of vigilance will be required". The final sentence is to be noted.

We came across some fly traps which we thought we would give a try. I'm not sure that there is any evidence that they are implicated in reductions in the incidence of fly strike. Also, are the flys trapped 'local' to our holding or have they been lured in from further afield? Moreover, its not clear how many of the trapped flies are blue bottles or green bottles, the culprits when it comes to fly strike. Whatever the case the traps are proving very effective at catching flys.

The heat wave continues and gardeners, smallholders and farmers have to do their best in the conditions. Looking after your crops is one thing but if you keep livestock there is a paramount responsibility for their welfare in this unremittingly hot weather.

The pigs are adept at making themselves as comfortable as they can. We currently have three breeding Saddleback sows.They have dug their own wallow adjacent to the water trough and as soon as the trough had been refilled they invariably turned it over to fill the hole with water. I’ve moved the trough and instead regularly top up the extended wallow using a hose. After their 4pm feed they each take it in turns to flop and rotate in the water and then emerge, rather like hippopotamuses, covered in a muddy layer. Pigs don’t have enough sweat glands to provide effective temperature control. However, water evaporating after a dip has a similar cooling effect. Apart from the cooling effects, a muddy layer acts as  a sun screen to protect their skin.

At other times the pigs snooze in the shade, keeping their activity levels low. They have also taken to sleeping outside during the warm muggy nights.

Meanwhile I go back and forth, re-filling the water trough three or four times each day. Unlike the pigs, I return indoors dripping with sweat.