Stick in the mud

Back in November when visiting a friend’s smallholding, I helped myself to some hard wood cuttings from their as yet unpruned redcurrant bushes. When I got home I planted the bundle of fifteen sticks in a corner of a vegetable bed and put a label round them. They were left to their own devices until today when I dug them up. All fifteen had rooted. They were then potted up for growing on. Something for nothing but a little goodwill.

Lillies of the field

Looking after a largish space in a rural location means that a suburban manicured look is neither possible, desirable nor appropriate. Inevitably there will be areas that are overgrown and where nature is in control. It also means that wild flowers have an opportunity to flourish if given the chance. Even in the sheep fields, the process of grazing promotes a habitat that some flowers favour.

My knowledge of wild flowers is perhaps little better than average and I not uncommonly feel shamed by a lack of ability to identify some flowers I come across. Strangely enough I’m much better at identifying cultivated plants than wild flowers which doesn’t seem right. I’m not necessarily referring to showy or dramatic plants but more often than not flowers that could easily go unnoticed but nevertheless are of intrinsic beauty if the time is taken to observe them.

But common troublesome weeds should not be rejected out of hand. The soldierly ranks of nettles marching their way across the boundary still have their role to play, not least as a host plant for butterflies. On the surface bind weed produces pretty flowers but (woe to them) underneath, their pernicious roots reflect their true natures and they are liable to condemn their neighbours to a strangulating death. The promiscuous dandelion provides a useful source of nectar for bees so I would not wish to be the first to throw weed killer at them. Despite their perceived shortcomings such weeds have a place and are all equal in  nature.

These aside, there are regular moments of great beauty through the seasons as different native plants, otherwise untended, come into flower. Today, for example, seemingly out of nowhere, one area of mowed, but weed killer and fertiliser free, grass is densely sprinkled with small pink stars. This is in fact one I do know: the ubiquitous Herb Robert (geranium robertianum). It caught the eye because of its sheer abundance. It is an example of the effortless beauty of wild flowers which come and go without a care in the world. 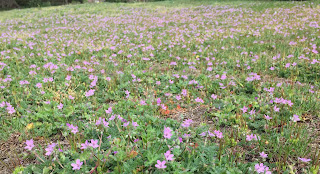 I’m going to try and make more of an effort to at least be able to identify the wild flowers on my plot and in the vicinity, and from time to time I’ll share my revelations here.

We picked our first asparagus of the year, on Easter Sunday. The recent days of warm sunny weather seemed to have caused a growth spurt. Anyone who has grown their own asparagus will, l’m sure, marvel at the rate of growth of the spears from one day to the next. It is a luxury crop in that it has a relatively short cropping season and is best eaten fresh. Something to look forward to each year and then most savoured when consumed in season.

The additional rows I planted a couple of years ago are now ready to produce a harvest, too, so there will be plenty of asparagus for us and some to share. It should see us through to Pentecost at least. 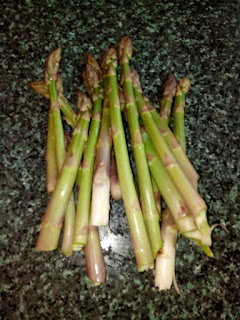 A fresh start with strawberries

Where we used to live we had a strawberry bed which produced bountiful quantities of fruit every year. This was despite being rather neglected and, apart from an annual weed and tidy-up, was more-or-less left to its own devices. It was very generous to us although we gave little back in return.

Strawberries are one of the easiest crops to grow and also integral to summer culinary expectations. However, here we have not had much success with them and they have been sorely missed. I had originally ordered plants from a reputable fruit plant supplier but they were bizarrely, and unexpectedly, delivered in the first week of January. As it turned out, a cold and wet January. I made the mistake of planting them out soon after they arrived and many of them had rotted off by the spring. What would have been better (aside from being delivered at a more sensible time) is to have potted them up and kept them in a greenhouse or cold frame until planting them out in the spring. Subsequent replacement plants never fully established themselves. It might be because of our hungry and thirsty, sandy soil. It also didn’t help that the neighbouring autumn fruiting raspberry bushes were throwing up shoots in the midst of the strawberry rows in an attempted colonisation. Instead of the gluts we have been used to in the past the harvests have been meagre to say the least.

It was time that this state of affairs was sorted out. I decided to create a dedicated strawberry bed, separate from the main vegetable plots. I chose a prime location alongside the length of the greenhouse. I used 5 x 8’ sleepers to create a raised bed: four along the lengths, front and back, and one cut in half for the two sides. I think raised beds, often promoted as the default way of creating a vegetable bed, are over-used but this is an exception to the rule.

I broke up the ground then filled the bed with soil. A few years ago, when I created a new vegetable plot, I skimmed off the top layer of turf. This I had neatly stacked with each turf upside down. It’s been minding its own business for the last 3 or 4 years. This was the source of my soil supply for the strawberry bed. The the grass had died off leaving a crumbly, weed free, loam. I mixed in my own compost to further enrich the soil. A sprinkling of wood ash was also added. Once filled and raked level, it was given a good soaking. I left it for a few days for the soil to settle before planting up.

I chose two strawberry varieties: Honeoye (early fruiting) and the well known Cambridge Favourite (mid-season). Both are reliable, heavy croppers with good flavour and have been awarded the RHS Award of Garden Merit. There was space for a row of 13 of each variety. I now just need to be patient. 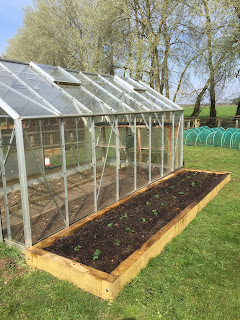