I’ve had a sheepy day. Two annual tasks were undertaken. The first was administering their annual Heptavac-P booster injection. This immunises sheep against soil borne pasteurellosis pneumonia and clostridial diseases. Carrying it out now means that protection can be passed on temporarily to the new lambs which should be on their way into the world from the middle of March. To make the job easier all the sheep were herded into my small barn, and as I’ve been feeding them some supplementary coarse feed they readily followed me in and the gate shut.

Once the injections were done the two rams (the main man and his companion, a castrated ram, or wether) were sent back out to pasture. The reason for this was this year I decided to scan the ewes for pregnancy. This is quite important for big commercial flocks to help better manage lambing. Scanning the ewes will indicate which ones are pregnant, expecting singles, twins or triplets. They can be marked and grouped accordingly. This will then determine their feeding regime prior to lambing and also how many deliveries to expect from each individual ewe. This can be important particularly in anticipating which ewes will be expecting triplets. As sheep have only two teats ewes will often have difficulty feeding three offspring and alternative arrangements for the third lamb might be needed, such as separate pens and bottle feeding. As newborn lambs will need four feeds a day this is quite a demand for sheep farmers and arrangements need to be in place.

I don’t normally trouble to scan my small flock of Wiltshire Horns. However, this year I decided to do so because we brought in a new replacement ram and he didn’t seem to display the same level of ardour as our previous ram. In addition, being new to us, he was a little too tetchy to get close enough to apply raddle (coloured dye) to his chest which is the usual way of indicating whether a ram has tupped each ewe.

I was a little late arranging for the vet to come round to carry out the scanning which meant that the scan would not show up how many, if any, lambs were developing but would confirm whether each ewe is pregnant or not. That was good enough for me.

As it turned out all eight ewes were indeed pregnant. This dispelled any doubts about the prowess of the ram. I suppose he just prefers to do it in the dark. Knowing that all the ewes are pregnant helps us to know what to expect and will help in the ewes' management in the lead up to lambing and hopefully contribute to the safe delivery of their offspring. 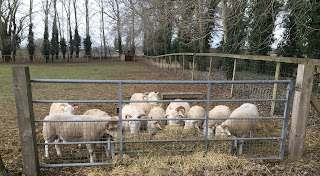 Now that the icy conditions have, for the time being at least, receded I planted a plum tree which I bought a week or so ago. A nursery we called in on was selling some fruit trees at a very reasonable price, probably because they were root balled, rather than container grown, and they needed to get them moved on sooner rather than later. I spied a healthy looking, well formed young tree among them and with premeditated impulsiveness decided to buy it.

It is the ubiquitous Victoria plum. But its popularity is well-deserved because it is prolific, very tasty and self-pollinating. We do have other plum trees, including an aging Victoria, but there is room for another. We like plums very much.

Battle of the broad bean tips

Now we have entered February, today was time to sow broad beans, my first sowing of the year. They are tough plants and cope well with the cold. I sowed 46 seeds (the total contents of the packet) and so should get two rows from this. They were sown in 3” pots and placed in the greenhouse for planting out when they are big enough in a few weeks time. The ground where they are to be planted is all ready for them. The variety was ‘Aquadulce Claudia’, a well known, reliable long pod variety. In March I’ll sow more broad beans and have ‘The Sutton’, an equally well known, dwarf variety, lined up.

Anyone who has grown broad beans will know that black fly aphids find the tender tips of the broad bean plants much to their liking. Thick clusters of black fly are probably the main pest of these otherwise resilient plants. The usual advice is to snip off the plant tips and eat them yourself to pre-empt the black fly. But I suspect black fly this coming spring will have a battle on their hands, because they in turn are very much to the liking of the offspring of these, which around here are over-wintering in abundance:-