Return of the flock

Today I brought back home our small flock of Wiltshire Horn sheep. They have spent the last couple of months in a field lent to me by a nearby farmer. My own  pastures suffered in this summer’s drought and by June the grass, which had been grazed down, had stopped growing.

The sheep had some new grass for a time but then I inevitably had to start feeding hay supplemented by a little hard feed as the dry period continued. However, I still had the additional benefit of resting my own fields and hopefully reducing the worm burden. Being just half a mile away, it was not a problem making twice daily visits to the sheep.

With the return of some rain my fields have gradually greened up again. However, the dandelions seem to have responded more vigorously than the grass and, in one of the fields in particular, their fresh green leaves have formed quite an extensive mat. I’m hoping that the sheep will graze them down to allow the grass to come through. If that doesn’t work I might need to do something more radical to ensure the pasture is in good condition for next spring.

As smallholders we are always looking to how best to preserve our produce for future consumption and to avoid waste. This time of the year is a particularly busy time in this respect as we try to manage the abundance granted to us, not with a little effort, from the vegetable and fruit plots.

One gap in our range of preservation techniques was the use of dehydration. This was a shame because we bought a hardly used, good quality dehydrator at a bargain price a little while back.

The Grow Your Own Group of which I am member, and which meets regularly, has helped put this omission right. One of our smallholding friends has accumulated considerable experience of using a dehydrator for all sorts of things and she gave a very practical demonstration of what can be achieved using this method, accompanied by many samples of the end products to try out.

This was just the inspiration needed to get started. I've begun with plums and this first attempt has produced very satisfactory results. I'm sure I will return to this topic in the future as I discover more about dehydration for preservation. 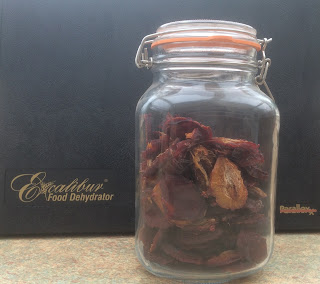 We have regularly bought in day old meat chicks to grow on in batches to 12-14 weeks. Once a year we do the same with day old turkey poults which, unlike the chickens which are a commercial variety, are traditional Norfolk Blacks which are slow grown for six months. This year for the first time we have done the same with ducks for meat.

A smallholding friend kindly sourced and organised on behalf of some of our smallholder club members the supply of pekin duck chicks. We collected 20 to grow on. And grow they did -  amazingly quickly. They are now ready for dispatch.

We processed one last week as a trial, not having previously plucked a duck. True enough it proved to be a lengthier and more laborious process than we are used to with chickens with whom we have become quite proficient in producing a clean finish. We used the same dunking in hot water method to loosen the  feathers but  ducks seem to need hotter water and a longer period of dunking to saturate and loosen the feathers more sufficiently. Care is still needed not to scald the flesh in the process so a little trial and error is required.

We've done six so far. Their dressed weight ready for the freezer has so far ranged between 2.58 and 3.33 kilograms which is quite acceptable. 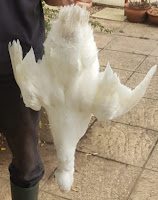 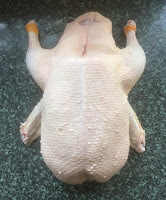 I was doing some sorting out of the compost heaps this morning and came across a small snake. Because of its size I thought at first it might be a slow worm but it was a darker green and had a distinctive yellow neck band. Googling confirmed it was in fact a small grass snake. I didn’t have my phone to hand to take a photograph but the image below is virtually identical in looks and size which settled the matter of identification. What a delight.

The last couple of attempts at artificial insemination with our breeding sows have been unsuccessful. I've recently had another go with our youngest saddleback gilt (Edyth) who is a year old. If I have got the all-important timing right then, other things being equal, the 4th November will be a day of great expectations.

Edyth's mother, Etheldreda, has been having problems, however. She has developed lameness for some time now. Her hoofs are not over-grown which is a common cause of such, nor has she any lesions in the sole of her trotters. More often than not Ethel walks leaning on her ‘elbows’. She is clearly far from comfortable. Looking at the way she walks and the way she struggles to heave herself up to stand on all fours, suggests to me an arthritic problem - so no quick fix.

The vet has been several times and thinks this might well be the case. Despite medication her condition has not improved. This is not good news for her. None of our livestock are pets. They are either for meat, sold on or kept as breeding stock. In Ethel's current  condition I would not want to get her in pig. Being unproductive in this way, and  also probably experiencing much discomfort, means she has to be culled. I doubt Etheldreda has the ability to climb a trailer ramp to take her to the abattoir and in any case has been treated with an annual wormer which which has a 70 day meat withdrawal period. This means she won't be returning as sausages but instead dispatched and collected by a fallen stock company.

The deed was done today. A premature end to a beautiful pig.

Edyth won't be on her own though as she will have her aunt, Ermindreda for company and hopefully she will have some off-spring to join her in the autumn.

The torrential downpour of rain which we had a week ago is the only rain we have had here since the beginning of May. There has not even been a sprinkling otherwise in all of that time. There are some green shoots evident in the grazing fields from the weekend's deluge, but more rain is needed for any decent re-growth and for the sheep to eventually return. Temperatures for us in West Suffolk have regularly been over 30 degrees C. Yesterday it was 33 degrees and today 31 is expected.

The conditions have been challenging for fruit and vegetable growing. This is on top of the slow start to the growing  year after the protracted cold and wet spring. I have resorted to occasional irrigation with the sprinkler to help things along. So far there have been mixed results. What has done well have been cauliflowers (strangely enough), onions and shallots, redcurrants, asparagus, the cut flower bed, early lettuce, Florence fennel.

The herbs in the 'herb garden' are doing well as might be expected in this Mediterranean climate we are experiencing. Going well are climbing beans, chard, mangolds, blackberries, outdoor tomatoes, gourds, sweet corn.

Cropping, but not in such abundance have been courgettes(!), garlic, broad beans, blackcurrants, gooseberries. Potatoes don't look to be cropping as heavily as expected. There is some scab on the early potatoes which is often a sign of dry conditions. This is not a problem as it is entirely superficial and they remain good to eat.

Things that have struggled in the heat despite any molly-coddling have been celery, later sowings of lettuce, radishes and calabrese which all have had a determination to bolt.

Particularly impressive this year has been all the greenhouse crops: tomatoes in variety, aubergines in abundance, and torrential quantities of cucumbers. The sweet peppers and chilli peppers are doing nicely and the young grape vine looks to be producing its first crop to get excited about. Watering the green house plants is part of the morning ritual, before it gets too hot for comfort in there. It has managed well on once a day watering. The plants planted in the ground (tomatoes and cucumbers) each get 20 seconds with the hose at the base which I count out. This way I can ensure they get a regulated amount each day and and therefore avoid split tomatoes which result from uneven watering. The paved path gets a bucket or two of water mid afternoon to calm things down a bit in there.

I am delaying sowing pak choi, chinese cabbage, spinach and any more lettuce until the temperature drops a bit. This is forecast to
happen in the next few days and maybe even some rain. We'll wait and see about the latter because when the rain is forecast from the south or west, by the time the weather front reaches us the rain has fizzled out and we miss out.