The hissing of summer lawns

Our grass at the moment is a golden biscuit brown. It has rather upset the plan to rotate the sheep around our three main grazing fields so that the grass has time to re-grow by the time the sheep arrive back. Alas, the grass has stopped growing. The problem is not so much the current protracted heatwave but rather the many weeks preceding where, however overcast, in this area we have had absolutely no rain. I have had to continue with post-lambing supplementary feeding plus ensuring that hay is available. And it’s not yet July.

The pigs are finding it hot too and lay in the shade much of the day. They have dug out their own wallow which I top up with a hose. Saddlebacks have a white band around the shoulders which is prone to sun burn so I rub on sun protection (factor 50 as it happens).

The neighbouring farmers have for some weeks been regularly irrigating the fields using enormously long hoses snaking their way through the crops with great jets of water pumped from the drains that criss-cross the land here. I’ve used my more modest sprinkler on the vegetable plots. It’s been a tricky growing season so far after the cold spring and slow start. 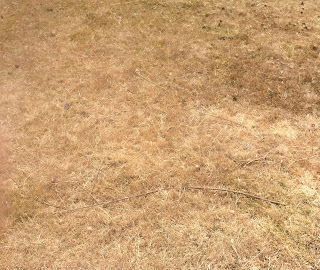 In summer, when day has fled, the plain covered with flowers
Pours out far away an intoxicating scent;
Eyes shut, ears half open to noises,
We only half sleep in a transparent slumber.

The stars are purer, the shade seems pleasanter;
A hazy half-day colours the eternal dome;
And the sweet pale dawn awaiting her hour
Seems to wander all night at the bottom of the sky.
Posted by Philip at 22:32 2 comments:

The first of this year’s courgettes, grown outdoors. They will keep fruiting at full throttle until September or later so long as we keep picking. And we will. Small for eating fresh at meal times, cooked or uncooked. Perhaps a little bigger for chutney making. Larger, or those we inevitably miss or which catch us unawares, for the pigs and the hens. None will go to waste.

I’ve grown three green courgette plants (‘Ambassador’) and three yellow (‘Gold Rush’). I find them equally prolific. The inclusion of the yellow ones in a salad make the dish look bright and summery. 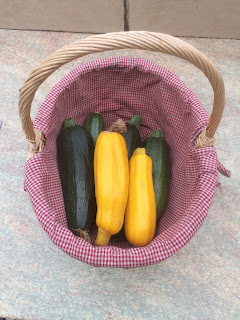 Our holding has arable fields on all four sides. Here is what is growing in mid-June this year.

The breed of sheep we keep, Wiltshire Horn, are generally regarded as much less prone to the risk of fly strike compared to other breeds because they have only a short coat of wool and are also self-shedding, dropping their wool naturally. This is probably true but these characteristics do not eliminate the risk of fly strike altogether.

Therefore, as with any sheep keeper, it pays to be constantly vigilant from at least May to September, the peak period when blow flies (green bottles and blues bottles) are out and about. This is the time when they potentially lay their eggs in the woollen coat of sheep, and when the maggots hatch they eat into the skin and flesh of the sheep. Death is a distinct possibility unless the infestation is spotted early enough and treated. The presence of maggots might not be obvious without close inspection, which means catching the sheep to examine them, which in turns means looking out for suspicious signs of fly strike being a possibility.

Unfortunately, one of our ewes got caught. A couple of afternoons ago I noticed she was hanging back from the rest of the flock. I could also see a dark patch on her side. This was enough to arouse suspicion. One excellent piece of advice I’ve picked up is that if you have a hunch something is not  well with a sheep, don’t leave it for tomorrow; deal with it right away.

I managed to catch hold of the ewe and sure enough there was a cluster of writhing maggots on her side. I brushed these off and used hand shears to cut away the wool  including well into the unaffected surrounding areas. The rest of the ewe was also checked for any additional site of infestation.

Fortunately the maggots had not broken through the skin which remained intact. If there had been any delay then this almost certainly would have been the case with the consequent likelihood of infection. I applied Crovect fly strike treatment and finally let her go again. She seems to be fine but I’ll continue to keep a close eye on her.

One of the reasons I like May and early June is that new growth is at its greenest and freshest and this provides a fitting backdrop to show up a succession of hedgerow whites. Pure white hawthorn blossom appears in mature hedgerow trees or along the hedge itself if its been left untrimmed. This is followed by roadside verges lined with cow parsley. Now it’s the turn of the elder, perhaps a little later than usual this year. 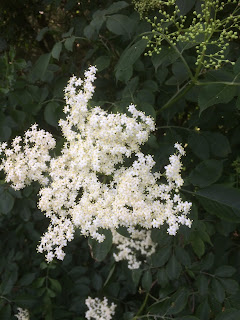 With the elder in flower it’s time for the annual ritual of making elder flower cordial, the most fragrant of drinks. It’s very easy to make but you have to pick the elder flowers when they are just ready or the moment is lost until next year.

Recipes abound but they are all broadly the same. I’ve been using the River Cottage one which seems to work well for me. I don’t add citric acid as the lemons and orange already contain quite a lot. I've not had any problems.

Use a funnel to pour the hot syrup into sterilised bottles. Seal the bottles with swing-top lids, sterilised screw-tops or corks.
Posted by Philip at 14:28 3 comments: