Our blackberries are cropping extremely well and today I picked another bowlful. The blackcurrants and gooseberries were reasonably abundant earlier in the summer, but the redcurrants, which crop a little later, were scorched in the hot sun. Having gone through weeks of hot dry weather (still no rain for us so far!) I was surprised to see so much ripe fruit on the blackberry bushes.

Blackberry bushes in the wild usually fruit well left to their own devices often in quite rough ground, and so maybe it should not be surprising. The advantage of growing cultivated blackberries at home is that you can get thornless varieties which makes picking them a more comfortable process. I tie in the stems to a stake and wire set up like raspberries which also makes the fruit more accessible. The fruits are also much larger than wild blackberries.

However, given that blackberries are generally freely available in the countryside and in parks (best to avoid roadside bushes) I wouldn't grow them at home unless I have the space to spare, which we are fortunate enough to have. On the other hand, if you have young  children in particular, it can be quite an adventure to go blackberry picking. 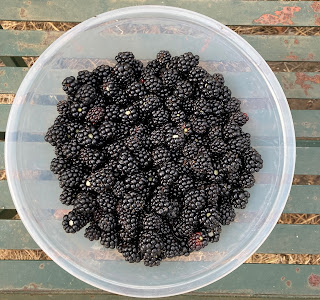